The RAVO 5 iSeries, which is completely designed and built in the Netherlands, is the absolute best compact mid-size street sweeping machine in the world. Its robust and recognizable appearance has been a common sight in cities all around the world for many years. Every detail of the 5 iSeries was developed with one thing in mind: a clean street in one pass, no matter the season or conditions, urban or rural, sand or leaves, desert heat or artic cold, highways or bicycle lanes.

The 5 iSeries is available with two container variations, Standard Tipping (ST) and Container Dump (CD) as well various transport speeds. For those who need specific requirements, RAVO offers a range of options to customize the machine and improve its performance, for example a third brush to increase the sweeping range or a silent package to reduce the noise level of the machine. To see the whole range of RAVO options or find more information about the 5 iSeries, please take a look at the online brochure below. 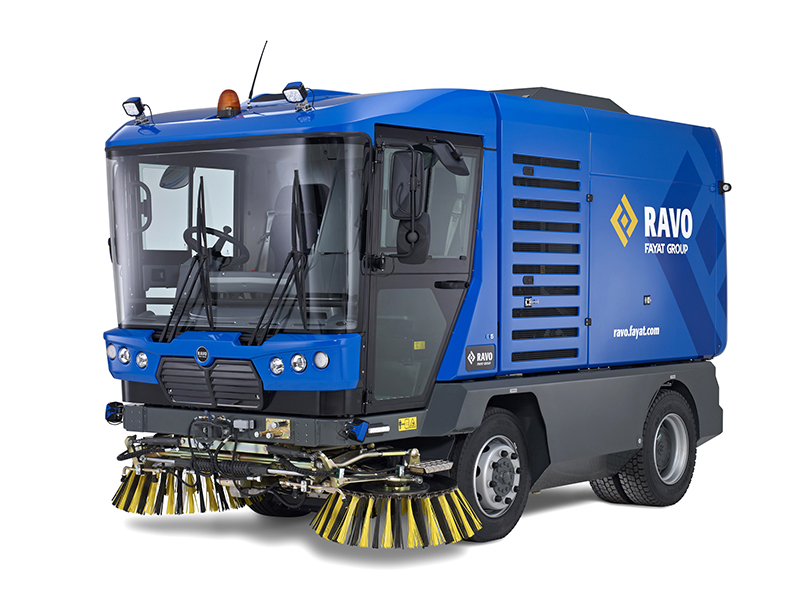 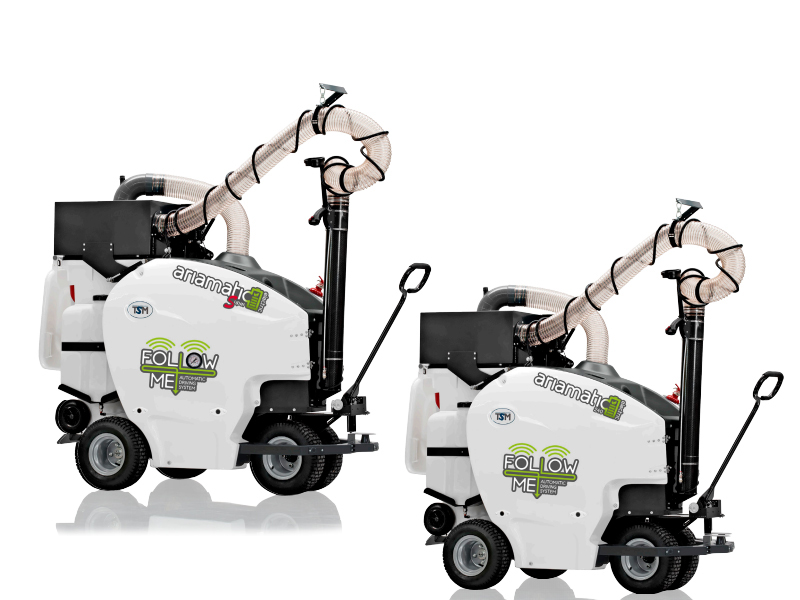 TSM ARIAMATIC 240 is totally a new concept from the regular self propelled urban vacuum cleaners, able to change the way of cleaning urban areas and historic centers. In fact TSM ARIAMATIC 240 is the very first electric litter vacuum cleaner with the autonomous driving system, equipped with the cutting-edge innovative Follow Me system able to recognize and to automatically follow the operator along the day during the cleaning tasks in the city center.

This revolutionary electric urban litter vacuum cleaner allows the operator to work independently, and free him from the management of the traction of the vehicle, being able to move so in complete agility between the city’s obstacles. The TSM ARIAMATIC 240 not only respects the environment because is with zero emission, but it’s the only urban and industrial waste vacuum cleaner developped taking care of the needs of the operator and to make the cleaning tasks more ergonomic and less heavy.

The safety devices with which TSM ARIAMATIC 240 is equipped detect obstacles and people, ensuring total safety not only for the operator but also for the urban areas in which it is used.

TSM ARIA 240 is the electric waste vacuum cleaner silent and with zero emissions, suitable for cleaning private and public areas, allowing cleaning operations at any time of day, even in crowded areas.

The electric street vacuum cleaner TSM ARIA 240 sucks any type of waste through the carbon fiber hose supported by the operator, which then flows into the 240 LT urban wheelie bin. It’s also equipped with a powerful PM10 fine particle filtering system positioned vertically, which retains the finest dust and injects only clean air into the environment. 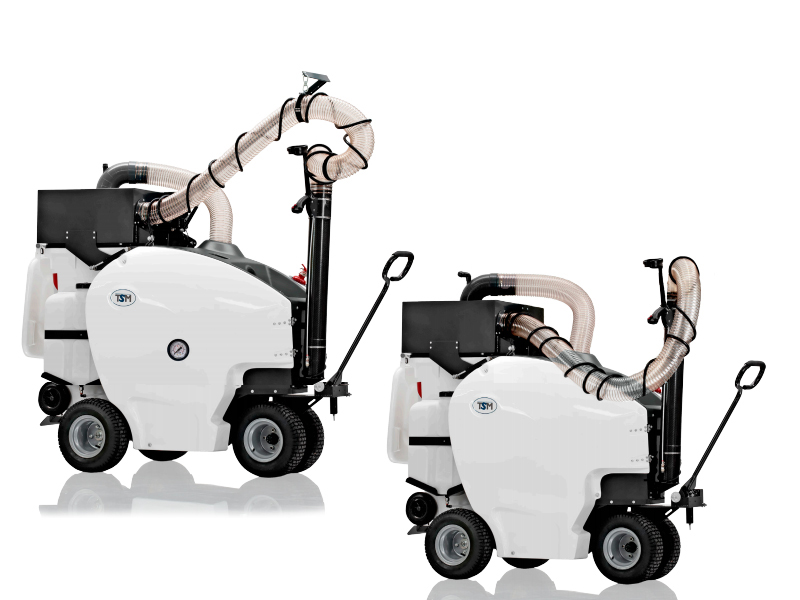 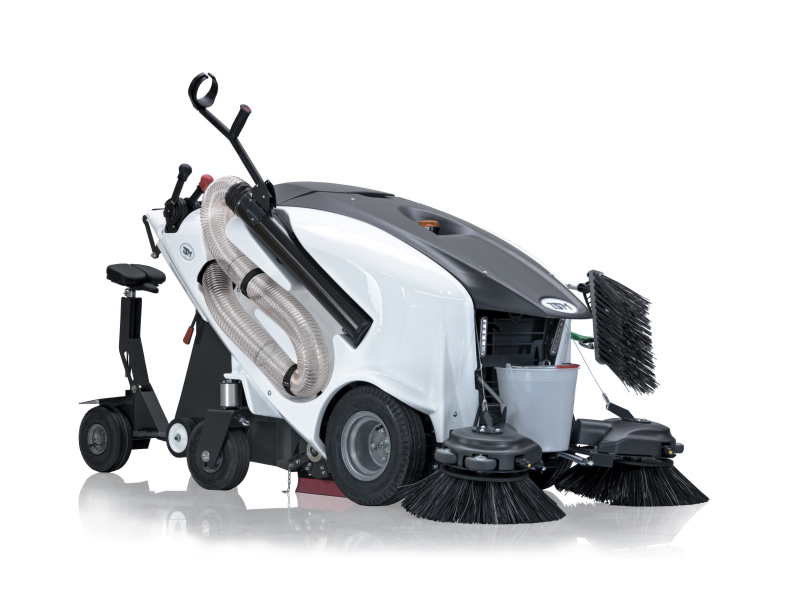 The “mechanical-suction” street sweeper TSM ITALA 135, is maneuverable and much quieter than the traditional urban machines, and represents a new concept of road cleaning machine particularly suitable for cleaning private and public spaces, including sidewalks, areas pedestrian and historical centers.

TSM ITALA 135 is defined as a “mechanical” sweeper because it collects waste by the central brush in a 135 LT bin and at the same time is a “suction” sweeper also thanks to its powerful filtering system able to guarantee total filtration PM10 fine dust, even in the absence of water, freeing clean air in the environment during all the time of use.
The municipal sweeper TSM ITALA 135 is also incredibly versatile because it can be used both as a walk behind model, as with the operator on board, with the addition of the charriot, offering the possibility to drive for long distances. It is also equipped with a wander suction hose for vacuuming bulky waste, reaching narrow spaces, such as flower beds, side benches, etc.

Its compactness, effectiveness and ease of use, thanks to the possibility of driving by inexperienced people without a driving license, make the TSM ITALA 135 Zero Emissions street sweeper unbeatable in cleaning city centers, pedestrian areas, parking lots, cycle paths, parks and public gardens.

When TSM equipment meets the high technology, the outdoor cleaning trolley TSM CUBO 180 becomes the revolutionary CUBOMATIC 180, an electric street orderly barrow with the self driving system, equipped with the cutting-edge Follow Me system.
Unique in the world, this innovative urban barrow is able to recognize and to automatically follow the street cleaner along the day during the cleaning tasks in the city center, freeing the operator from the management of the traction of the vehicle, being able to move in complete agility between the town’s obstacles.
The TSM CUBOMATIC 180 street orderly barrow comes equipped with 3 wheelie bins for the segregation of different waste streams, and the equipment transport is efficient through busy pedestrian areas.
Video 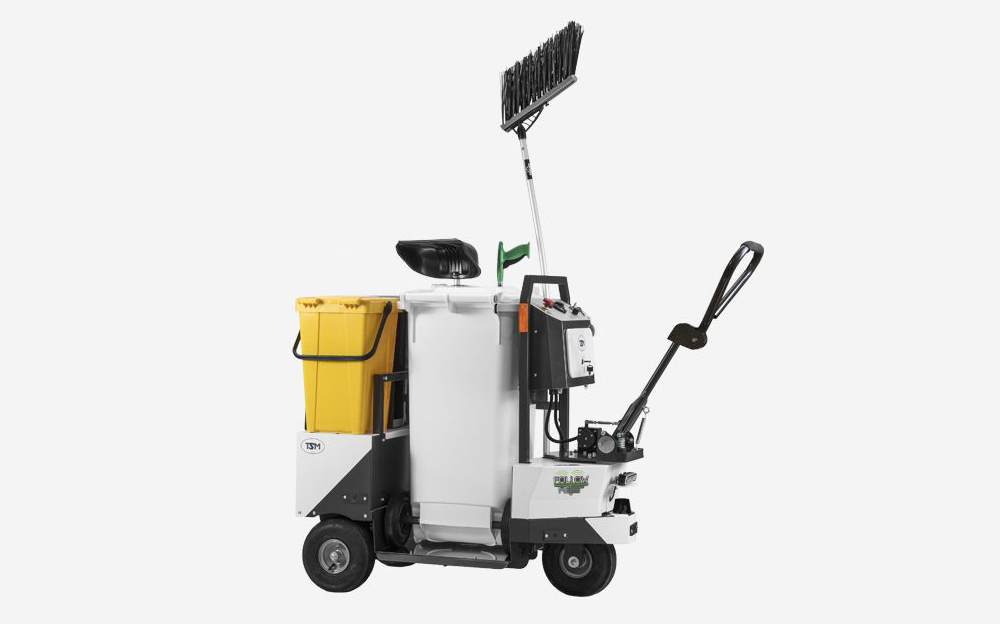 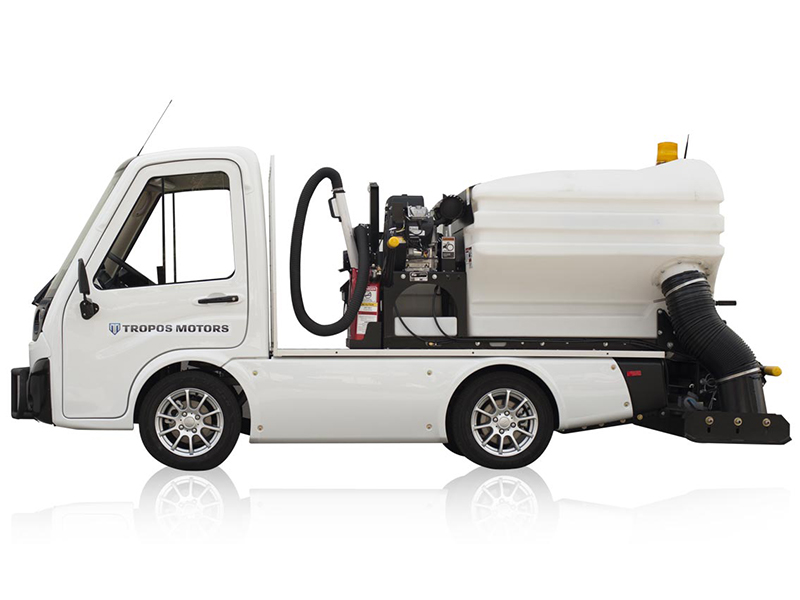 Utility, Versatility, Flexibility in One Truck 100% electric
The ABLE™ is designed for utility and versatility and with our unique Easy-Swap™ bed platform. Easy-Swap™ is a system that utilizes the flexibility of the ABLE’s design, payload, & towing capacities, to change the bed package as needed,* making the ABLE™ completely customizable and configurable.

One truck can serve many functions: In minutes, the ABLE™ can transform from from a delivery vehicle, to a campus tour hauler, to an EMS. Easy to switch or swap as needed, the ABLE™ can be multipurpose tool for many different uses within a single organization.

Subscribe to our newsletter so you do not miss anything!

Join hundreds of people who, thanks to our emails, stay informed of our news, current promotions and expert advice from our team!

You have Successfully Subscribed!